The Conseil Départemental de la Haute Savoie and the Grand Annecy make it possible for you to travel freely on the entire Sibra network thanks to the Coach+Bus partnership of which the objective is to:

Coach + Bus is valid on the 16 LIHSA inter-city lines which are in the perimeter of the Grand Annecy. 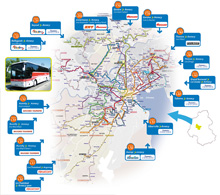 Coach + Bus is valid under the following conditions:

- yearly season tickets for under 26 year-olds: on presentation of the Declic card and season ticket (300 € or 400 €), you benefit from a 50% reduction on the corresponding yearly Sibra season ticket (only available from Espace Sibra)